Despite building several successful companies, Varuna cofounder Seyi Fabode doesn’t think of himself as an entrepreneur. “I'm not a big fan of the word, personally,” he reflected. “I just like to think of what I do as solving problems.” Even by his own modest definition, Seyi has been tackling some of the world’s toughest challenges for more than 19 years. After earning an MBA from the University of Chicago and a Master of Science degree in manufacturing systems engineering from Warwick University in the UK, he spent several years consulting with leading utilities and in emerging markets on technology strategy and product development. Living and working at energy brokerages and power plants across Africa, North America, and Europe gave Seyi a unique lens through which to identify opportunities and inefficiencies. Determined to help consumers worldwide make more informed, responsible decisions, he founded Power2Switch, a leading retail energy marketplace technology website that enables residential and commercial electricity customers to compare and switch electricity suppliers. After founding, scaling, and eventually selling Power2Switch, Seyi kept in contact with Jamail Carter, the company’s first hire and go-to sales lead. When the water crisis in Flint occurred in 2018—followed closely by the first boil warning in Seyi’s adopted hometown of Austin—he called up Jamail with an idea. Could they replicate what Power2Switch had done for electricity, but for water utilities? “The thread between Power2Switch and Varuna is the fact that Jamail and I strongly believe that when people know better, they do better,” said Seyi. “Our goal at both companies is to find them the information and present it in a way that helps them to make good decisions so we can all collectively do better.”

Water quality issues boil down to one thing: operational inefficiency. Utilities usually lack the right infrastructure needed for data collection; they either have just a few costly sensors that can only reach select parts of a water system, too few of those sensors to provide a good overview, or simply have none at all. To top it off, the sensors are often not connected to a network, which means that workers have to physically conduct costly in-person readings. Seyi hypothesized that if cities swapped out the expensive sensors for cheaper ones, they could use AI to fill in the blanks on the resulting data in order to remotely provide a utility with more detailed information on the contaminants in water. 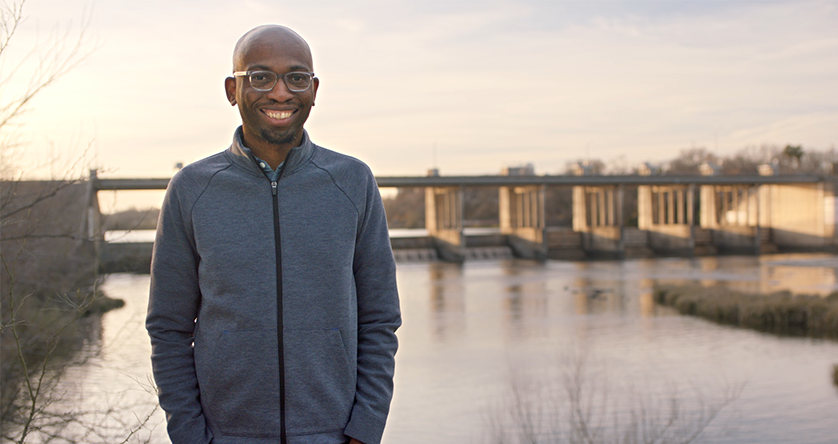 After months of prototyping and research, Seyi and Jamail launched Varuna, named for the Vedic deity associated with water, truth, and enlightenment. Leveraging off-the-shelf sensors and proprietary algorithms, Varuna offers utilities turnkey, real-time monitoring of water quality throughout distribution systems. The platform, sold via a SaaS subscription, provides visibility, alerts, and predictive analytics, enabling system operators to get ahead of any issues before they become major problems, while also reducing overall costs by operating via Cloud technology. “For cities or towns that currently don’t have connected hardware for sampling, we provide water quality hardware,” Seyi said. “For those who do, but they might be old, we provide an amplifier so we can collect the data and channel it to our dashboard.”

Google tech is critical to helping Varuna customers gain visibility across their entire distribution network—specifically, to help provide answers to fundamental questions. To manage water quality, utilities need information on what is in the water, where the issue is if there is an issue, and when the issue happened to understand the impact. With Varuna, the operator can understand these vital Water Health Signals™' by looking at the what, where, and when—as well as see Varuna’s suggestions on how to address the what in real time. Varuna sensors inform customers of what and when issues may occur, and leverage Google Maps Platform to communicate the where. The three pieces of data combined exponentially increases decision-making capabilities for water systems. “Google Maps API is easy to access from GCP [Google Cloud Platform],” says Seyi. “The data for the what alone may be 86400x10 datapoints/day from a single sensor/node. To store this data, we use Firestore. The data comes from our sensors and we intend to manage those devices using IoT Core. For insights and analytics (anomaly detection, trends, prediction of contaminant shocks, etc.) we are deploying BigQuery and Stream Analytics.”

The only way to create real change is paying attention to the gravity of an issue, be it improving water quality or leveling the playing field for Black entrepreneurship, because only then will we all collectively start to address it.

While Seyi and Jamail had extensive experience building a tech company, navigating the startup ecosystem as Black founders wasn’t easy. “There are two things you talk about when building a business as a Black founder: access and obstacles,” said Seyi “Obstacles are the kind of things every founder faces as they build and grow. Access—to talent, to funding, to networks—is more of the problem for Black founders, because it’s not simply a matter of figuring out what we need and going to get it.” Although 10% of American companies are Black-owned, less than 3% of U.S. venture capital funding went to Black-led companies in 2020. Despite their proven track record in the industry, Seyi and Jamail needed resources and customer development to support their ambitious hardware design and engineering goals. So they joined Capital Factory, a Google for Startups partner tech hub in Austin, Texas. Known as the “center of gravity for entrepreneurs in Texas,” Capital Factory provided a coworking space, tech-focused events, mentorship, and (most importantly) community. “Capital Factory offered pitch practices and pitch sessions, as well as stellar investor intros,” said Seyi.”We ended up with two angel investors in the last round.”

As a Google for Startups partner, Capital Factory could connect Seyi and Jamail to a global network, too. In 2020, the team nominated Varuna for the $5M Google for Startups Black Founders Fund, which provides non-dilutive cash awards to Black led startups in the Google for Startups network. Seyi and Jamail were selected to receive $100,000 in capital along with hands-on support to help their startup grow. Just three months after receiving the award, Varuna raised an additional $1.6 million and added two team members as well as a design agency partner—all while redesigning and halving the cost of their hardware. “The Google for Startups Black Founders Fund came at a critical and important time for Varuna,” said Seyi. “The funding enabled us to add the required resources, especially as water quality issues are gaining more importance across the U.S. There’s the recognition that Black founders have a much more difficult time in raising money to build companies, and this was Google’s effort to help bridge those gaps.”

Seyi and Jamail are committed to paying it forward beyond the tech industry too. Research shows that water systems in communities of color have a disproportionate amount of EPA violations. By taking away excuses and providing key information, Seyi saw that Varuna could positively impact underserved communities. So the team first piloted programs in historically diverse locations across Louisiana, Texas, New Jersey, and Alabama — and have their sights set on Chicago and New York City next. The Varuna water systems currently deliver clean water to thousands of customers in the Southeast and New Jersey, with a goal of becoming the water utility operating system for 500 U.S. cities by 2025. “The only way to create real change is paying attention to the gravity of an issue, be it improving water quality or leveling the playing field for Black entrepreneurship, because only then will we all collectively start to address it,” said Seyi. “Awareness is the first step. We’re clear about our mission, but flexible about the path to get there—as long as we walk with integrity towards that destination.”

Scale your startup with Google Cloud