Fingers flying, brows furrowed, the grade school students all agree: Their audio game, “Tetris for the Blind” is a certified hit. On vivid, Crayola-hued game controllers, the kids tap and copy Braille letters, rushing to copy the raised dot patterns before they disappear. Over built-in speakers, their digital teacher announces a new round of letters—spoken, sung, and rhymed—and instantly available in ten South Asian regional and national languages. That’s Annie. A playful edtech concept from Bengaluru startup Thinkerbell Labs, Annie teaches blind and visually impaired kids as young as 4 to self-learn Braille through play—with or without tutors present.

“Annie fascinates children. At schools, children who showed little interest in sitting in class began asking their teacher to skip lunch breaks, so they could continue learning Braille on their Annies,” says Thinkerbell Labs co-founder Sanskriti Dawle. “To many students, Annie is not something but someone talking to and learning with them.”

By going all-in on a play-filled approach to teaching Braille, Thinkerbell Labs believes Annie can crack the code on teaching foundational Braille skills through gamification. Early investors in Thinkerbell include the Indian Angel Network and the billionaire Indian business magnate Anand Mahindra. During a 2016 incubator at Masschallenge UK, the Duke and a blindfolded Duchess of Cambridge learned to type ‘George’ in Braille—using a first-gen Annie.

Founded six years ago by four engineering grads in BITS Goa, Thinkerbell Labs is having a breakout 2022 as an edtech with serious global buzz. In February, Thinkerbell Labs founders appeared on the debut season of Shark Tank India. This time, their elevator pitch focused on a demo by 10-year old Prathamesh Sinha, a visually impaired Braille student, who showed hosts how rapidly Annie teaches Braille, with a video clip that soon went viral.

Annie’s advantage: Teaching multiple students at once, no intro necessary

“Annie assumes that you don’t know any Braille. Annie’s games and songs teach you from scratch,” says Dilip Ramesh, Thinkerbell Labs’ chief technical officer and a co-founder. “Annie schedules lessons, gives feedback, and immediately tells you what is wrong. Those corrections are gently rendered with a personal touch by welcoming a child in the responsive voice of their teacher.”

Now in use by thousands of students in South Asia, the United Arab Emirates, and the United Kingdom, Annie is scheduled for a North American edtech rollout later this year. Students from all 50 states of the US will now have access to the product, starting this academic year. Across schools, nonprofits, and hospitals in sixteen different Indian states, Thinkerbell Labs has installed over 500 Annie devices and set up nearly 50 Annie Smart Classes—kid-friendly, family-welcome, audio labs that enable instructors to efficiently teach multiple students at once.

An edtech with an arcade feel and a global mission: Teaching 19 million blind kids

“Braille literacy can seem out of reach for the 19 million children worldwide who are blind or visually impaired. Under traditional methods, it can take a year of closely supervised, one-on-one, very demanding schooling to learn Braille basics and build tactile finger sensitivity,” says Dawle. “By design, Annie teaches Braille in a gamified manner, as children play and learn from their surroundings and compete with their peers.”

Which also is a very grown-up way of saying Annie looks and plays like an arcade game.

“Most of us grew up with better educational games in the 1990s than blind children have access to today. That has to change,” says Dawle, who notes that much edtech for special education is long overdue for content updates.

“A lot of change has happened in education during the last two decades, which is completely missing for the visually-impaired community. There are a lot of reasons for it, but one is the lack of tutors," adds Ramesh, co-founder and chief technical officer at Thinkerbell Labs. “We aim to reduce this gap.”

Only 1 in 10 blind students read Braille. How Annie can boost childhood literacy rates

Teaching kids Braille changes their lives forever. As adults, blind women and men who can read and write Braille achieve vastly different employment and education outcomes than those who never had the opportunity. Yet across India, Europe, and North America alike, fewer than 1 in 10 blind or visually impaired children pick up Braille literacy, a figure that has remained persistently low for decades. While many factors keep Braille literacy rates low, a global instructor shortage is chief among them.

“Since every teacher teaches by holding the hand of a visually-impaired student and runs it over the dots, even if there are five people in the class and the lesson is 40 minutes long, imagine how time-consuming it would be for both parties,” says Dawle. “So, since Braille is a tactile language, the self-learning device Annie is the gentle hand that hand-holds the student through Braille.” 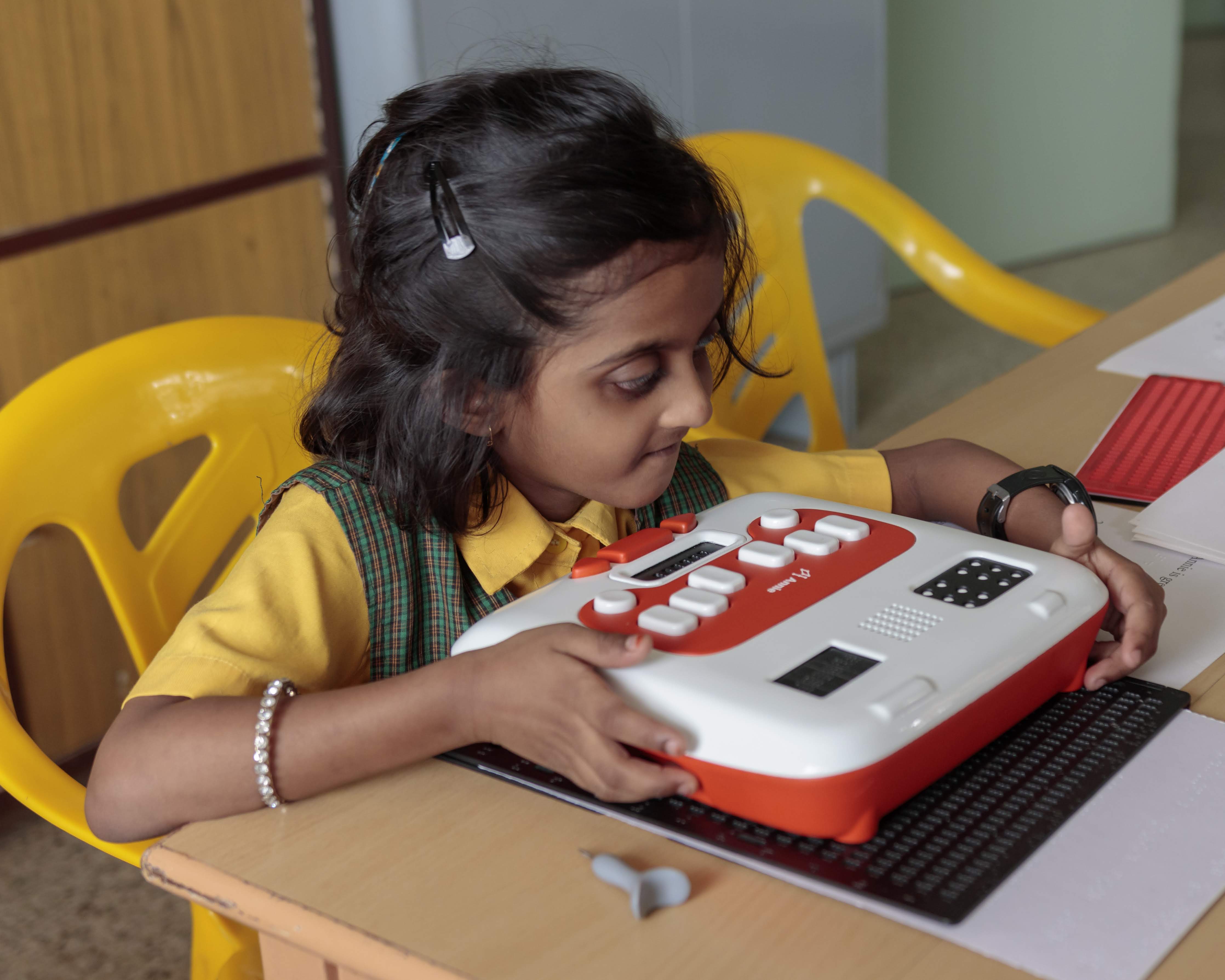 “Any regular teacher can cater to the learning needs of a child with visual impairments studying in an inclusive setting. This is important, as many visually impaired children in India and abroad struggle in mainstream schools,” says Dawle. “With Annie, we aim to eliminate all of that and give learners who are visually impaired a chance to learn comfortably, interactively, and independently.”

The first contours of Annie’s design took shape in the 2010s at the Goa campus of the Birla Institute of Technology and Science Pilani, when Dawle and co-founders Aman Srivastava, Dilip Ramesh, and Saif Shaikh built a Braille alphabet song box on a Raspberry Pi.

“We received overwhelmingly positive feedback and enthusiasm from visually impaired students and their teachers alike,” says Dawle. “As sighted developers, we also needed to understand for ourselves what these learners required from their learning tools to have an effective educational experience.”

So the team relocated to Hyderabad for a year, learning Braille alongside grade school students and conducting field trials for learner feedback on the hardware, software, and content of Annie at other academies and institutes for the blind in Bangalore and Dehradun.

“Along the way, we developed a uniquely comprehensive learning experience on Annie,” adds Dawle.

Annie doesn’t lack for recognition. A winner of over two dozen awards in edtech design and social impact, Annie is an officially recommended edtech best practice of both the United Nations Development Program and India’s influential NITI Aayog think tank. Going forward, translating those awards into deals and contracts remains the key objective for Thinkerbell Labs.

“As a startup, our future depends on acquiring new customers and partners,” says Dawle, who joined other Asia-Pacific women founders as part of Google for Startups Sales Academy, a seven-week program that equips founders with Google’s signature Thrive sales strategy—asking better questions and handling client objections to expand business relationships and trust.

“The Google for Startups Sales Academy training was something I could bring back to our team and make an immediate impact on negotiating products and services deals with clients,” says Dawle. “That means communicating the cost advantages of Annie right alongside its educational benefits.

”That sales training could ultimately improve Thinkerbell Labs’ bottom line, as improved deal-making skills bring the startup closer to anticipating customer needs and manufacturing demands. Produced at a facility in Pune, Annie currently sells for around $1,000 USD/Rs 70,0000, with Thinkerbell Labs netting around 50 percent profit. By comparison, most Braille readers run between $5,000 to $15,000 USD. While Annie is available for consumer purchase in developed markets, Dawle says Thinkerbell Labs remains primarily patron-driven, with a large share of its investment and operating income coming from corporate social responsibility funds and Indian B2G investment.

“We are running pilots at different places to better understand how to integrate our innovation in the existing system," says Dawle.

Within their domestic base in India, Thinkerbell markets Annie as a smart class solution with Annie toolkits, server support in localized languages with a typical setup cost of Rs 10 lakh ($12,500 USD). With Annie now in use at private schools and institutes in Wales and Dubai, Thinkerbell Labs has partnered with the UK’s Royal National Institute of the Blind to curate content as the startup expands further into international markets.

“Of the 180 million blind or visually impaired people in the world, nearly 90 percent live in the developing world,” says Dawle. “Annie was designed to make Braille literacy accessible and impactful in this market. By designing for everybody, we have arrived at a solution that solves the problem of learning Braille in both the developed and developing world.”

From Bengali to Marathi, English to Hindi, Malayalam, and Arabic, Annie communicates in the most spoken languages in South Asia. Annie speaks UK English and Arabic, as well, with a North American accent and content approach in the works.

“Thinkerbell Labs works at the intersection of social impact and tech. Our dream of working towards an inclusive world means that the heart of an education in Braille includes play, fun, stories, interactive lessons and games,” says Dawle. “As children, we treasured playfulness. When such moments were a part of our classrooms, they're indelibly imprinted in our minds. Helping bring these joys to the classrooms of visually impaired children is a wonderful thing. Annie helps kids make sense of the world through play.”