As the concept of creator monetization has emerged over the past decade, Ashwarya Garg and Akshay Bhatnagar have seized upon the opportunity. To date, content creators have been able to earn money from ads served over their videos and advertisement deals integrated into their content, but not much else. Garg and Bhatnagar decided to figure out a way to help content creators monetize their work.

Friends and co-entrepreneurs since starting college in 2010, Garg and Bhatnagar's latest venture, Hypd, helps content creators earn a living from the content they create. Hypd enables creators to build a new monetization stream over existing content distribution platforms like YouTube. Creators convert their product recommendations and endorsements into affiliate income when someone buys a product the influencer has endorsed from their store. Hypd is currently working with over 3,000 content creators.

“People tend to buy products from the influencers they like, instead of going to a website or clicking on ads,” says Garg. “Campaign ads are not as popular as actual influencers educating about a product.” 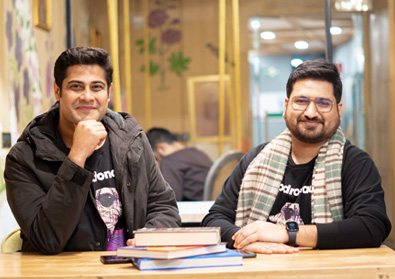 Garg and Bhatnagar initially saw Hypd as giving creators the opportunity to host their shoppable content on a new platform. While attending Google for Startups Accelerator: India, they realized their initial model might create too much friction.

“Before we came to Google for Startups Accelerator: India, our product vision was slightly different,” explains Garg. “We were trying to build a parallel platform–a new app where new content would be streamed, creators would sign up, and create lifestyle content, and users would come in to learn and shop from it.”

During the three-month Google for Startups Accelerator program, Google mentors helped refine Hypd’s business idea and the form of their product. Now, Hypd leverages content creators’ existing distribution channels, like YouTube, to help influencers make money off their content by enabling direct commerce over it. Garg says their strategic pivot saved them time and money.

“Creating a software SaaS infrastructure helped us create a more scalable product,” says Garg. “We could focus on the consumer journey, focus on creator monetization and bridging the gap between getting excited about an item and buying it, instead of creating a parallel product, which helped us save millions.”

Hypd’s Google UI and UX mentors taught them about the user journey and how user decision-making is always time sensitive. Garg and Bhatnagar wanted to make the concept of “See it, like it, buy it” happen in a few seconds and a couple of clicks, so users could quickly go from “I like the dress my favorite influencer is wearing,” to “I now own the same dress as my favorite content creator.”

Their mentors showed them how to save microseconds for each user, both creators and consumers..

“We understand from the Google Analytics team how to understand the content creator’s journey, the key features they need from the product, and which priorities to build on,” says Bhatnagar. “That has shaped our product.”

“The OKRs stuck with us, and we adopted them for our teams,” says Bhatnagar. “Google validated us and boosted our morale.”

They used Firebase analytics data to scale their Android app.

“Firebase gave us strong analytics and feedback on how our app ecosystem is working,” says Garg. “Google Analytics helped us figure out user clicks and where users are spending time on the website and in the product. The most clickable options have to appear closer to the top, and the less clickable options need to be reconstructed and moved to the bottom.”

At Google for Startups Accelerator, the Hypd team created the foundation for an Artificial Intelligence (AI) and Machine Learning (ML) development module, after learning AI/ML best practices, like the types of datasets they would need to train models to give recommendations and keep users interested in a specific content creator’s interface.

During the program, they completed an overhaul of the app’s look and feel and spent time on product optimization, which, combined with UI and UX improvements, increased the value proposition for their two-way marketplace by mapping the brands with creators. Consumer screen time increased from 10-12 minutes to over 18-22 minutes; engagement (Like, Comment, Interact) increased by almost 40%; and overall app ratings went up to 4.9, with users complimenting the new interface.

“The best part was the speed at which we were able to execute things,” says Garg. “Our Startup Success Manager and our mentors helped us ideate on paper, and our team went from paper to prototype in less than 48 hours.”

Post-Accelerator progress and advice to other founders

Hypd has raised two rounds of funding: a $1.4 million seed round and a pre-Series A round. They took a unique approach to investing, inviting some of India’s top content creators to invest in the company and build it alongside them. Influencer managers and B2C founders have also been early investors in the company. “Our message to other founders is, until Series A, your first round should not be financial investors but people who have experience in your area,” Garg says.

Garg advises aspiring startup founders to familiarize themselves with their customers’ needs and to choose team members carefully. “People who believe in your vision will help you build your business and will help you succeed,” he says.

They consider themselves proud members of the Google for Startups network. and regularly host Google Developer Groups and other Google community events.

“We really appreciate what Google is doing to build an overall community, from engineering talent to creator talent to a suite of products,” says Garg. “We’ve always felt very connected to the Google ecosystem.”

Create an app for Android